I know I haven't been posting on a regular basis, but I've been keeping up with the trades!
Leave a comment or send an email if you'd like to make one.
Posted by Kelly at 11:16 AM 2 comments:

I love Josh Beckett. I've always stuck by him through his good and bad years. He's having an amazing 2011 so far, but with only 9 wins to show for it. All the other Sox starters get at least 5+ runs a game of support with some getting 6. Beckett meanwhile gets just over 3. It just goes to show that winning is a team effort. Pitching is obviously important but you need the offense to help you out in order to get that W. Sabathia has 16 wins this year, pretty much getting a W or at least a decision every 5 days. (Beckett has 8 no-decisions. Most of those went into extras.)

It's interesting that he's gone head to head against Beckett 3 times this year. The record: 3-0 to Beckett. When voting for the Cy Young comes along, do you think the writers will take into account this factor? Probably not. Of course, there are other guys who definitely deserve the award like Weaver and Verlander.

Now I just had a thought. Is it possible for Beckett or Ellsbury for that matter to get consideration for Comeback player of the Year? Beckett had a 5.78 ERA with a 6-6 Record in an injury plagued year. He currently has a 2.20 ERA and was named an AL All-Star. Jacoby only appeared in 18 games last year and now has that number in the home run column. Ells was named to his first All-Star Game and is having a career year.

(I really need to get my Josh Beckett card collection posted on here soon!) 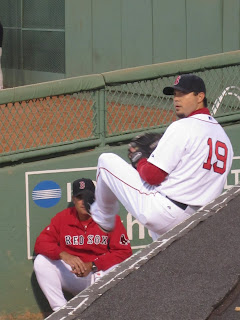