Hey everyone,
Sorry I'm just getting around to post this now...

Back in the beginning of June, I went to Baltimore with my Dad to see two Red Sox games. We had a great time. The first game we had seats on the 3rd base side. Those were my favorite. Clay Buchholz pitched a complete game shutout and we saw Adrian Beltre take out Jeremy Hermida. (He's having a great year, but needs to stop personally injuring our depleted outfield!) The second game we had seats on the 1st base side. These were closer to the field but farther from home plate. This game was amusing in many ways. The Sox won of course, with Jon Lester pitching 7 shutout innings. Daniel Bard got into the game, and I love Daniel Bard! There was an Orioles family sitting behind us who trashed their team the whole entire night. In front of us, there was an elderly woman who was a Red Sox fan and a 20+ year old guy who was an Orioles fan. They trashed each other the whole game and that was hysterical. Here are some pictures I took around the city and at the games: 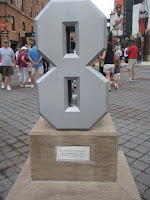 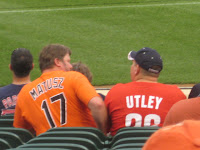 I'd like to know why people tried to steal this statue? Not exactly easy to hide. There were a lot of Phillies fans at the game. There was also a Yankee fan sitting a few seats away, but he left in the 2nd inning. 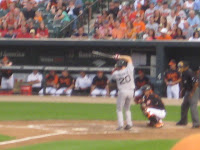 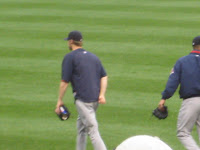 Daniel Bard had a Red Bull hidden in his glove. 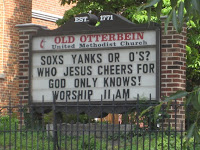 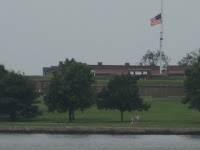 Great bulletin in front of an old church. Fort McHenry, where the Star Spangled Banner was written. 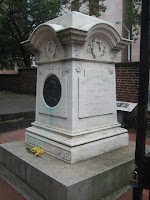 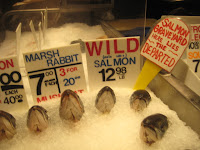 The grave of Edgar Allan Poe. Pretty creepy cemetery. Almost all of the graves were above ground in tombs. We went to Lexington Market, they had some pretty interesting things for sale. This "Salmon Graveyard" made me laugh. 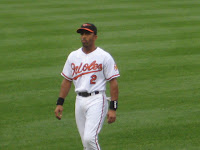 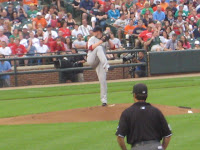 Julio Lugo doesn't look like a very happy camper. Jon Lester in his windup.
Posted by Kelly at 11:58 AM 1 comment:

Hi everyone, I have plenty to talk about. First things first, my 2010 Topps Series II Jumbo Box.
Here's what I got:
*entire base set.
*plenty of doubles...so let's do some trading!

Overall, I enjoyed opening this box. It's always nice to get a complete set in one shot. I've been debating with myself since Series I came out whether or not I should collect all of the inserts. In some ways I want to because I like having the complete set but there are some inserts that are just plain ugly or don't have a purpose. I hate ToppsTown. Luckily, they got rid of it in Series II but replaced it with Attax cards. ...Not collecting those. Another unnecessary insert is the Peak Performance. There are way too many of them! Some of the inserts could potentially grow on me. For example, the 2020 inserts are kinda odd but I think I like them. My favorite, though, is The Cards Your Mother Threw Out. The concept is really cool.

The base cards have really nice photography once again. However, the foil names on Series II seem to be much harder to read than the ones printed on Series I. Is it just me, or do others feel the same way? 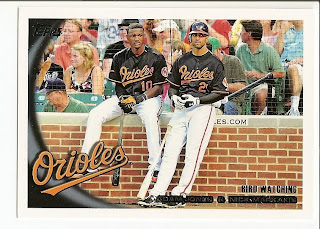 Can anyone see what's wrong with this particular base card? It's been photoshopped, of course. However, I think they did a bad job with it. Can you see why I think so? 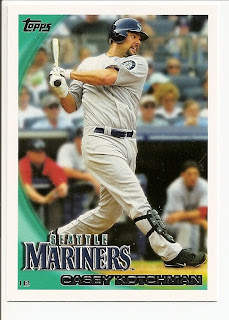 I recently completed a trade with Jeremy Scott. He knocked plenty of cards off my want list as well as sending me some surprise Red Sox cards. Didn't expect that, but thanks a bunch. It was fun trading with Jeremy, and everyone should keep him in mind if you ever want to trade. Thanks!
Posted by Kelly at 10:58 AM 3 comments: