It's raining and it's pouring and tomorrow it will do the same thing. As long as the Sox-Yanks game isn't postponed, I'll be a happy camper. You see, I'll be attending the game at field box level! So excited! This will be the first Sox-Yankees game I've ever been to. I'm looking forward to seeing the team in person. Even though the Sox were eliminated the other day, this game will still have meaning as this final series will decide who gets first place in the AL East. Should be interesting!

I'll post pictures from the game. Also, I have a few trades I recently made that I need to cover. Stay tuned!
Posted by Kelly at 6:03 PM No comments:

The Pirate Ship is Real.

Hey Everyone,
Saturday night I went to the Sox/Jays game with my college. We had an amazing time even though the Sox lost. I'm not on very good terms with Ryan Kalish at the moment. He got picked off in the 9th inning right before Victor Martinez hit a triple that would have tied the game.

Anyway, I had my first experience in the bleachers. We were right by the NESN sign by the "triangle" in center field. Since we got there around 5, my friend and I had the privilege of watching the Jays' batting practice. Homeruns came to either side of us or fell just short and landed in the Red Sox bullpen. We stood at the bullpen until the game started. This was a good thing considering people started filling in around us wanting to see Beckett warm up.

There is a Jolly Roger flag mounted on the bullpen wall. The pitchers are introduced with music from Pirates of the Caribbean. Their pet "parrot" comes along with the pitchers are rests in front of the flag. Do other teams doing anything like that?

The September 18th game was my 9th time seeing the Sox and first seeing Beckett. It was such a different experience to be just feet away from him. A fastball has such a unique sound, and it was crazy to hear it whiz by my head.

Here are some pictures from the game. Enjoy! 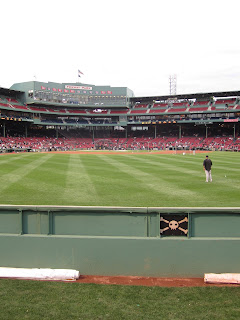 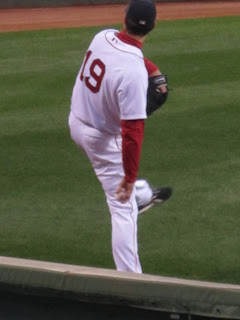 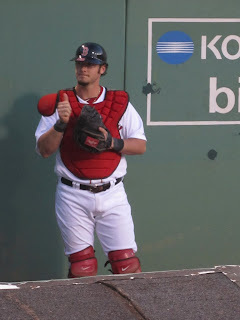 this picture of jarrod was an accident, but i love it! 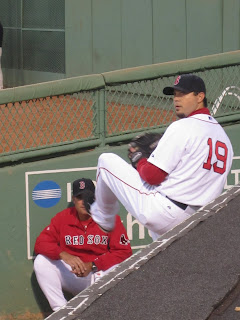 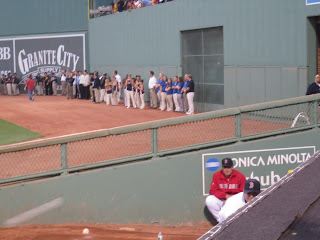 you can see the path of the baseball on the bottom left. 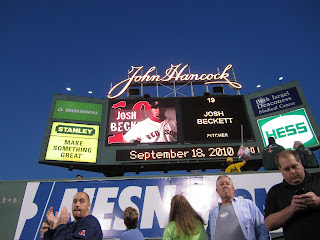 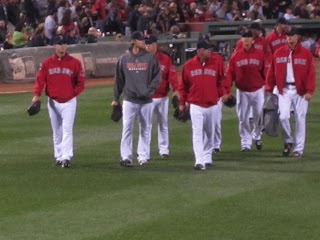 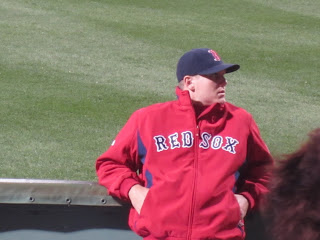 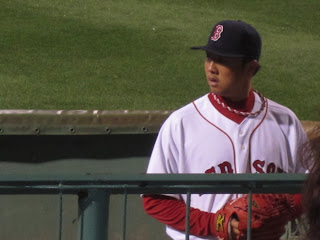 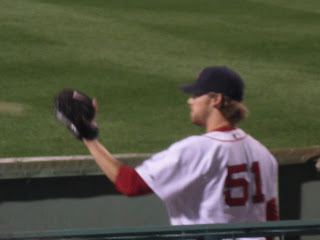 How does one aquire a favorite player? Part II

Dennis Eckersley: Eck is an analyst for NESN. Last year, he filled in for Remy and I think he did a great job. His vocabulary is quite unique, even amongst baseball standards. (Hairy cheese with gas...or salad. How often do you hear that when someone is analyzing baseball?) During his first stint with the Red Sox, Eckersley had a drinking problem to the point where he became an alcoholic. He had a very troubled life at such a young age, but through the support of his second wife he was able to overcome his problems. It shows that even athletes and superstars deal with the same issues as everyday people, but also the fact that these issues can be conquered. This, along with his work for NESN sparked my curiousity in his baseball career. I knew he was a HOF'er, but that's it. I soon learned he threw a no hitter with Cleveland; was a starter with the Red Sox; became a dominant closer with the A's and enjoyed a long and successful career. He just seemed like an interesting guy to collect. (His hair, mustache, and delivery also played a roll in my decision.)

Miguel Cabrera: When people talk about the best players in baseball, they immediately think of Albert Pujols, Alex Rodriguez, Derek Jeter, Roy Halladay, Ichiro. I never hear anyone mention Miguel Cabrera. His stats are just as good as these guys and he's still very young. Cabrera has been completely overlooked since he joined the Tigers for the 2008 Season. 2010 gave him his first All Star selection in the AL, but the vote wasn't even by the fans. No one ever mentions what he did with the Marlins. He made his debut in 2003 and helped the team beat the Yankees in the Fall Classic. He's had problems in the past with his weight and more recently with alcohol but Cabrera has recognized his problem and has since gone to rehab for it. I just wanna give the guy a little love. He deserves it. I'd give him a 1st place vote on this year's AL MVP ballot. (.333AVG, 110RBI, 33HR, 83BB with 29 being intentional, a .428OBP and .624SLG)

*I also collect Jerry Remy, but I have most if not all of his cards. When I see a good Sean Casey card, I'll pick it up. He's such an easy going guy and I really enjoyed watching him play with the 08 Sox. There was some really funny moments that involved Casey. Chris Iannetta is another guy I have interest in. He's a local guy from New England and has plently of potential. He just needs to take advantage of it. Perhaps a change of scenery would do Iannetta some good.
Posted by Kelly at 4:02 PM 1 comment:

How does one aquire a favorite player?

Lately, I've been organizing my player collections and it got me thinking "why do I collect these players?" For starters, I should probably tell you some of my favorite players...Josh Beckett, Mike Lowell, Daniel Bard, Miguel Cabrera, and Dennis Eckersley to name a few. Josh Beckett is very inconsistent, Mike Lowell is old and will be retiring at the end of the year (sorry Mike), Daniel Bard has little experience, Cabrera has had problems with alcohlism, and I was 6 years old and didn't care about baseball when Eck played in his last game. Why do I like collecting these guys so much?

Josh Beckett: My passion for baseball was ignited during the 2007 postseason. (I knew about 2004 of course. At the time I was 13 and understood how big a deal it was that the Red Sox finally won a World Series for Boston) I watched Game 7 of the ALCS out of boredom. I went to bed before the game was over and the next morning turned on the TV to see the Sox had won and advanced to the World Series. Should I watch the Series? Yes. Beckett pitched game one and I thought he was absolutely amazing. (I didn't even know he had won 20 games in the regular season). He provided me with a great first impression and by the time he struck out the side in the first inning, he became my favorite player. As my knowledge for baseball expanded, I learned about his years with Marlins. His heroics in the '03 World Series against the Yankees made me adore him even more. His 2008 season disappointed me beacuse I didn't get to see the Beckett I had read about. The 2009 season provided me with that Beckett, but this year has been "ehh" to say the least. He's a guy who pitches well every other year it seems, but he's my favorite player and nothing will stop that.

Mike Lowell: World Series MVP. Need I say more? I will anyway. Mike Lowell appeals to me because he has been with Josh Beckett since Beckett joined the Marlins organization in 1999. Lowell was an extra in the Beckett trade before the beginning of the 06 season. That bit of information interested me and forced me (in a good way) to pay attention to Mike Lowell. Whenever I went to a Red Sox game, Lowell always did something special. Drive in the winning run. Homer. Make a spectacular play at 3rd base. I just enjoyed watching him play, and in turn, decided to collect his baseball cards.

Daniel Bard: Me being a girl plays a hand in this. I think Daniel Bard is absolutely adorable. His attractiveness made me pay attention to his appearances. The more I watched him pitch, the more I realized that there was so much more to like about him. He pitches so easily and with such velocity. It's amazing. I love the way he strikes out people. 100MPH fastballs and then he drops a slider on them. Daniel Bard has great potential and could eventually become the next closer. (Might be sooner than you think, since Papelbon has been not as dominant)

I'll talk about Cabrera and Eckersley in another post. I'll try to get up some of the cards from my various collections as well. Beckett takes up the majority of my collection, but some of my favorite cards depict Lowell. Stay tuned!
Posted by Kelly at 8:55 PM 4 comments:

Relaxing end to a busy week.

Wow, talk about a busy week!
I started college and got my license, not to mention I'm in the process of redoing my room. I'm trying to keep up with this blog as well as trades, but failed.
I wish I hadn't missed the end of the Gint-a-Cuffs, but I wouldn't have won anyway. I think I'll still post some of my favorite cards from the two boxes at some point.

I don't wanna think about this, but I must be realistic. My Red Sox won't be going to the playoffs this year. I'll still be keeping up with them though as I am not a bangwagon fan. My college has organized a trip to Fenway to see the Sox play the Jays at the end of September. I hope to purchace tickets. Only $15! I'm assuming they're bleacher seats, but I've always wanted to see the view from there.

In case you are wondering who I'll be rooting for coming the postseason, my top choice is the Cincinnati Reds.(Unless the Sox pull off a miricle, of course) If they fail to go all the way, I'll then be rooting for the Braves. Sorry Yankees/Rays fans, but I will not root for the teams that finish ahead of the Sox!

I hope everyone has a great Labor Day Weekend!
Best Wishes,
Kelly
Posted by Kelly at 3:08 PM 2 comments: